New features in ServiceNow San Diego: Some of our favourites 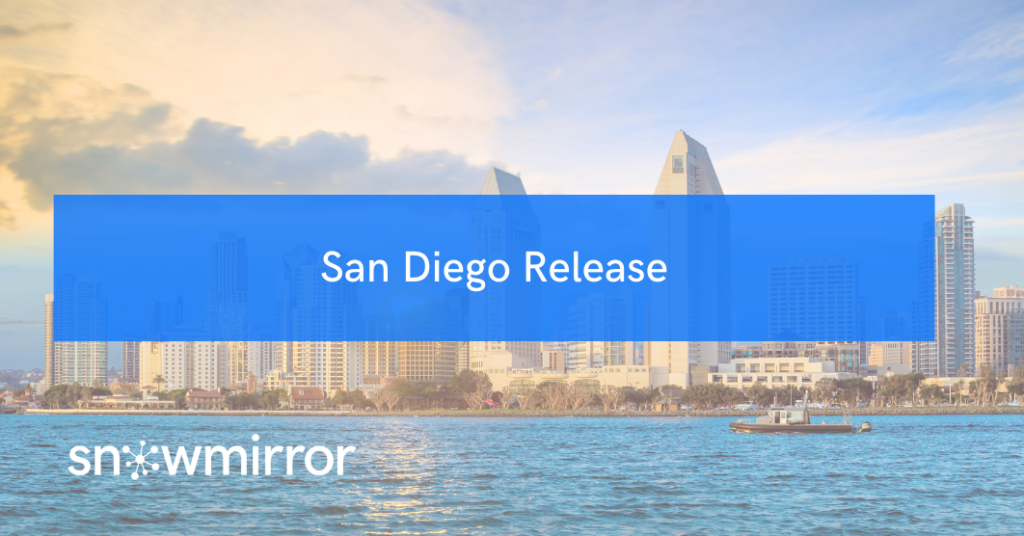 SnowMirror is the smart replication solution for ServiceNow, and we’re fully compatible with the upcoming ServiceNow San Diego release. There are quite a few technical improvements in ServiceNow San Diego that we are looking forward to, and we’ve got a brief overview of some of the more significant ones.

People working as Now Platform implementers or in quality assurance will especially appreciate several of the improvements in ServiceNow San Diego.

One of the most important additions to ServiceNow San Diego involves the introduction of breakpoints to the Now Platform’s Automated Testing Framework, in addition to catalog order guide sequencing.

In code testing, a breakpoint lets you pause the execution of your test at any point when executing a test run. This makes troubleshooting much easier, because when a test fails, you’re able to better see which step is problematic. ServiceNow San Diego lets you build in breakpoints to testing steps for easier debugging. Then the steps can be repeated to identify the part that is causing the test failure.

ATF pause before rollback comes in handy when tests fail. It enables the viewing of log messages, and the data that is created during the test, which would previously be deleted, can now be saved before it is erased. Up to now, it was more difficult to debug tests because there was no option to do so.

ServiceNow San Diego also includes another useful feature in catalog order guide sequencing. Many ITSM developers have tried to implement sequencing, and this will definitely come in handy. Now the ServiceNow San Diego release includes Order Guide Sequential Fulfilment out-of-the-box. Sequences can be generated, and the reference field and select are used. If there isn’t one in place, a modal window will appear which lets you open the Process Automation Designer (PAD) to configure it. We think many in the ServiceNow community will welcome this. Then you can view the existing sequence and edit it.

The ServiceNow San Diego release also makes improvements to Flow, specifically in adding try/catch and error handler improvements. Flow now supports try/catch blocks, which enable designers to trap errors and continue the flow. In the event that something occurs in the later actions, Flow will catch that, send a notification and write an entry in the log. Flow’s Error Handler is still available, but try/catch is an improvement that will give implementers more power.

Flow getting stuck was not pleasant. But now that Error Handling is in place – it was first in the Rome release – this is getting much easier. For many, this will also provide incentive to go back-to-the-box, meaning to go back to an uncustomised ServiceNow.

One of the strengths of Flow Designer is the way it supports diagramming, because it lets business consultants more easily map out steps. This will especially be popular for users of ServiceNow’s low-code features. This will also make it easier to migrate, as well as to edit within Flow. This is an area where we can also look forward to an expansion of the view, which will be very useful for debugging.

Robotic process automation (RPA) is another area where the ServiceNow San Diego release shines. RPA lets users write and execute ‘robots,’ which ease the process of integration when the platform you want to integrate with doesn’t have an API. Instead of having people copy and paste data, now you can build a bot to do it for you – screenscraping becomes an option for more users. San Diego also includes and RPA Spoke, which enables bot management and calls to flows and subflows which trigger back on the instance. This feature is expected to be very popular among ServiceNow implementers. At the end of March 2022, more than 3,500 actions will be made available.