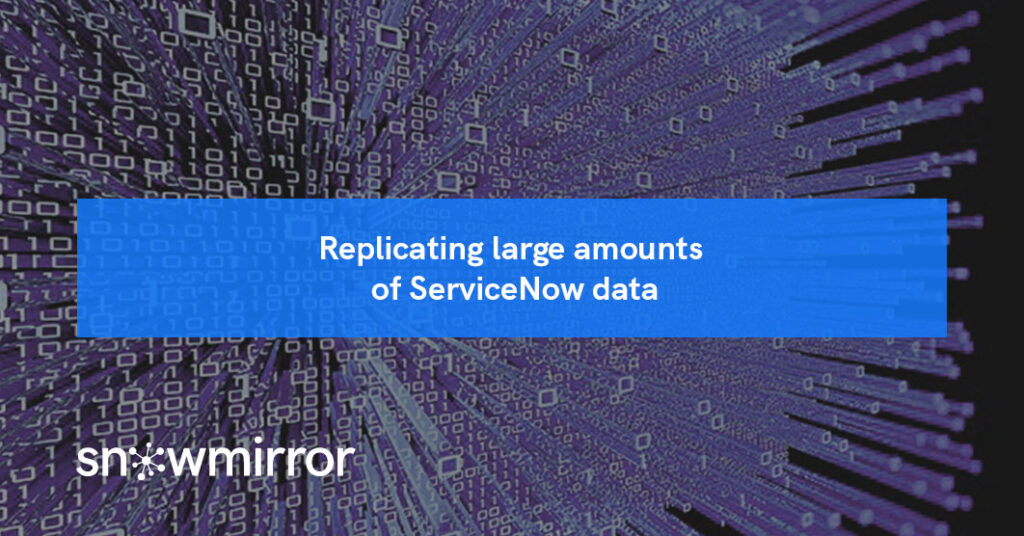 With more than 189,000 employees, Comcast NBCUniversal is one of the largest telecommunications and media companies in the world. Comcast is the largest cable TV and home internet provider in the United States, and their media holdings include television networks such as NBC, Sky and Telemundo, as well as Universal Pictures, home of blockbusters such as the Jurassic Park franchise.

In order to make its ServiceNow data accessible for analysis and other purposes, Comcast needed a solution to replicate ServiceNow data to a database they could connect to directly. In addition, Comcast needed to retain large amounts of data generated during events such as outages for later analysis. Other teams at Comcast needed data from ServiceNow’s Incidents, Tasks, Problems and Configuration Management Database, and wanted to use it in their own data lakes and warehouses.

Within the company, Comcast uses tools such as Tableau and PowerBI extensively for data analysis, data visualization and dashboards. Based on its architecture, it is not recommended to connect these tools directly to ServiceNow.

Smart replication and ease of use

In 2019, Comcast installed GuideVision’s SnowMirror, a software tool for making smart replications of data from ServiceNow. SnowMirror is part of Infosys ESM Café, a suite of AI-powered solutions designed around best practices that increase ServiceNow performance by 40 to 50 percent.

Comcast chose SnowMirror because of its ease of use and high functionality, even at scale. “I first started exploring tools to get data out of ServiceNow into a database we hosted, so that it could be used for data visualizations and things like that,” explains Steve Zadroga, a senior automation engineer at Comcast.

Comcast engineers also appreciated SnowMirror’s ease of installation. “There’s no coding, no consultants, no 2-hour WebEx. It’s very straightforward to install. It’s ‘put this here, license here,’ and it basically spins itself up. Click a button for a new synchronization, select a table and pretty much off you go,” Zadroga says.

Comcast leverages SnowMirror’s functionality so that it makes calls to each of its 20 ServiceNow nodes so that data syncs faster than if it was pulling data from the same instance or same node.

The data replicated from ServiceNow was first stored on-premises, but is now stored in the cloud. Data is replicated multiple times daily, providing near real-time information.

“For the larger tables, SnowMirror gives you the opportunity to recognize these schema changes in ServiceNow and auto-apply and resync the data, and you’re back up and running with the latest data in the table,” Zadroga explains. “For a lot of our larger tables, I don’t do these auto-schema updates, just because I’d rather not have a table that holds 30 million records sync during the day, so our ServiceNow team will reach out to me and say, ‘hey, we’re adding a location field to records now.’ I can go to SnowMirror, import that new field to the table and in the off-hours I’ll kick off a full sync of 30 million records. This way there’s minimal impact to our users.”

For Comcast, the priorities for using its replicated ServiceNow data are clear. “We do reporting number one, data retention number two and the third is making this data available to other teams, so that they can do whatever they want with it and pull it into their data systems or warehouses.”

Because Comcast now has easy access to the replicated data from its ServiceNow instance, it can easily use tools such as Tableau and PowerBI for sophisticated reporting and dashboards. For example, Tableau users can analyze Comcast’s very large data sets synced from ServiceNow without impeding performance. Many of these tables, such as the CMDB, have more than 40 million records.

ServiceNow data can also be combined with information from other sources to create a large data lake, which can then be used for analysis. “You have a full plane of glass on what’s actually out in Comcast’s world,” Zadroga says. “Different teams do different things with the data, but all of it is super valuable. Just having it available is a huge win.”

Over time, interest in working with Comcast’s ServiceNow data has increased, Zadroga explained. “Over time, more and more people say, ‘oh wow, this data is available in the database? Can I get tables X, Y and Z now synced?’ Now I think we have a pretty good base of tables that people are actually going into the mirrored database to get the data before even going into ServiceNow.”

Comcast retains data from ServiceNow that would otherwise be automatically deleted, especially in event management. “Some of the high-level reports we have now are around event management, so getting the data out allows people to see the volume of events that are happening – the number of incidents being created by these events,” Zadroga explains.

“I definitely have nothing but good things to say about SnowMirror. It solved our problem. It’s super easy to use and the return has been fantastic,” Zadroga says.