How to tackle operational complexity with automation and AI 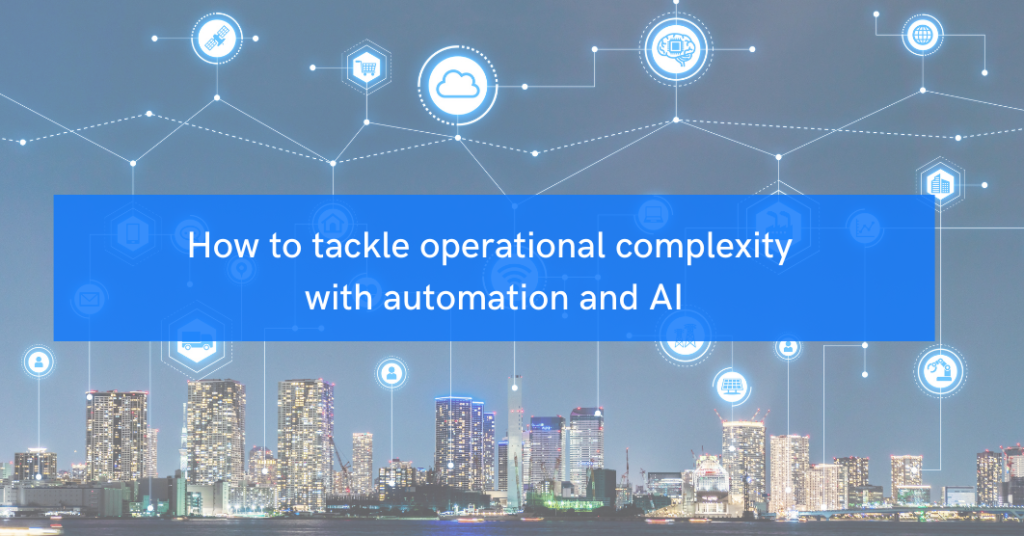 Despite the widespread availability of cutting-edge solutions to complex business problems, the Covid-19 pandemic has shown us just how fragile the economy is. The fact remains, even after decades of technological advancement, that most organisations aren’t nearly as resilient as they thought they were. Even in the best of times, today’s globalised market is constantly changing and evolving; consumer habits along with them.

The constant pace of change has brought about a level of complexity that’s extremely difficult for people alone to tackle. Unforeseen challenges, such as the sudden need to send everyone out of the office to work at home, have caused enormous disruption. To future-proof operations and prepare for the challenges of tomorrow, today’s organisations need must take a proactive stance.

Here’s how automation and AI can make that happen:

There’s probably a tonne of things you’re doing everyday that can be automated. For example, people in marketing might spend a fair portion of their time manually posting updates on social media or publishing blog posts. Event organisers might spend time sending emails to everyone who’s signed up. Research teams might spend hours trawling through the web to find news on the latest trends. These are just a few examples of things which can be automated.

Automating routine operations isn’t about replacing people’s jobs with computers. It’s about augmenting their capabilities by reducing the digital noise and giving them the opportunity to focus on the things that matter most. Yet automation and AI remain widely misunderstood. It’s not about dehumanising your operations. On the contrary, it’s about giving your team the time they need to work on tasks that need a distinctly human touch.

Common routine practices include things like requests and non-critical alerts. For example, AI operations can evaluate alerts to determine whether they can be handled automatically based on the metrics and supporting data available.

Computers are often the first to get the blame when something goes wrong, but the cold, hard truth of the matter is that human error is usually the culprit. Any tedious and repetitive manual process is likely to result in human error, simply because it’s harder to stay focussed through all the monotony. Moreover, some systems are just too complex for humans alone to operate. A common example is Big Data, which refers to data sets too large for human comprehension.

AI doesn’t just eliminate human error from routine operations. It can also recognise serious issues faster and with greater accuracy. This is especially important in information security, in which increasingly complex attacks exploit a wide range of interconnected systems. AI can map such events and draw attention to the source of the incident. This gives people the chance to act swiftly and make informed decisions before the problem spirals out of control.

AI can go even further by recommending actions based on previous successful outcomes and rerouting critical tasks to the right personnel. When it comes to the availability and security of mission-critical systems, AI wins every time over the slowness of human response times.

Today’s businesses must be able to adapt quickly to sudden changes in the market, including when the wholly unexpected happens. They also need to be able to grow unhindered without risking falling apart under their own weight. In other words, they need to be adaptable in the era of constant change and economic uncertainty.

One enormous overarching benefit of AI-powered automation is that it’s extremely scalable. Granted, AI requires substantial compute power, but that’s much more affordable and readily available than human resources. With the scalability of cloud data centres on your side, you can grow your operations seamlessly. For example, AI may detect unexpected peaks in online activity, automatically scaling server capacity to accommodate the increased demand.

Once you’ve set up an automated digital workflow, you can apply it to just about any workload. That will be one less routine business process you have to worry about when you’re operating a high-performing service.

While automation enables IT staff to automate a raft of repeatable workflows trigged by certain inputs or events, the real power lies in the way modern solutions leverage artificial intelligence. AI enhances automation with a proactive approach, which acts based on nuances found in increasingly large and complex data sets, as well as historical behavioral patterns. In other words, it can take automation to a whole new level by taking care of routine decision-making.